Our George is now a Lady!

Before she was George, she was  Ashley. I suppose for many she is still Ashley, but to me, she’ll always be George.

In the mid 90’s, her reputation preceded her arrival. Reportedly possessing ‘other-worldly’ athletic genes, a fiercely competitive personal discipline, and cutting-edge training from “the other side of the river” – she was the soccer phenom simply known as “AshleySarabok” (yes, rolled together as one name). Almost immediately, in hushed, excited whispers, the word spread; it was deemed a virtual certainty that the Monroe Township Under-11 Girls Team was destined for soccer immortality. 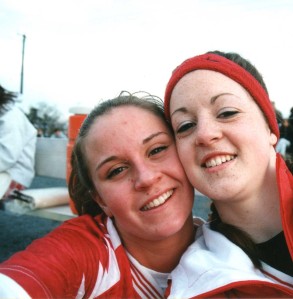 Caity and Ashley struck up a friendship on the soccer field that spilled over to school, and each soon became fixtures at the others home. When they weren’t together, they were connected by telephone or AOL Instant Messenger. Not only was this during the era of the ‘dial up tone’, it was also that period of time (before cell service and Caller ID) when I would actually answer the house phone. Ashley called so often, I could recognize her voice by the end of “Is” in the sentence “Is Caity there?” Somewhere along the line I started asking, “Is this George?”

‘George’ stuck, as has her constant presence in our family’s life. Through school plays, dances, soccer, lacrosse and basketball at Eagle View Middle School and Cumberland Valley High, Caity and George were seemingly connected at the hip. The number of laps they walked around the track during CV home football games is far too great to add up. George  became a much closer part of our family than she had ever bargained for. While vacationing with us one summer, George got the unexpected experience of a bleary-eyed, bent haired, spit-spewing monster. Even today I suspect she’ll give warning about keeping quiet while I’m sleeping in the middle of the night. Conversely, later (much later) she would learn to make a lot of noise while entering our home on surprise visits during the day.

Long before Twitter and Facebook, there was George. During a middle school era sleepover at our home, I overheard Caity’s girlfriends giving her advice on how to handle a boyfriend issue. I sensed an opportunity to possibly impact the course of history through the delicate balance of a father’s boundless love, an appreciation for boy-girl psychology,  and the power of  mass communication: Walking into the living room where the gaggle of seventh-grade girls was gathered around the computer, I calmly, but firmly, stated, “If anybody hurts Daddy’s little princess, I will break their @#&%ing legs!”

George gets credit in part for spreading that message among the boys throughout the CV School District well into the new millennium. Nice work, George!

Any reflection on George’s life would be hollow  and incomplete without mentioning her  ‘thug’ phase.  Out there somewhere is a photo of George sporting cornrows and black/silver studded clothing. Nothing more need be said.

I don’t for a moment pretend to know everything that George and Caity did together while growing up, nor do I want to; for what I know is enough. Perhaps it may have started when my sister Kathleen took Caity and George on a girls weekend at the end of seventh grade. Cruising the Jersey Shore in a Chrysler convertible seemed to resonate well with these impressionable adolescents.

Whether practicing dance videos in our basement, or dishing about boys poolside over at Saraboks; whether in Ocean City (MD or NJ!) or Raystown Lake; or hanging out in West Chester or Mechanicsburg, these two together would become a force to reckon with. What followed is a litany of shared life experiences. 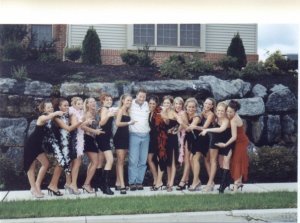 In keeping with the childhood pledges likely made in a basement or poolside, last year, George served as Caity’s Maid of Honor.   Next year, Caity will be George’s Matron of Honor. 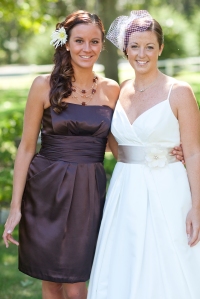 As George has grown into the beautiful young woman she has become, it has been a treat to see her community involvement through Briana’s Hope, Special Olympics, as well as coaching girl’s lacrosse at her alma mater. George is a colorful thread woven through the fabric of our family’s life, and it is with great joy we have seen her blossom as her love for Tyler has grown.

Tyler, I know you are man enough to take George as your bride, the question is, are you ready for the litany of life experiences George will take you on?

Congratulations Tyler and George! We could not be happier for both of you.

George Hock, Bride.  It has a nice ring to it, don’t you think?

One thought on “Our George is now a Lady!”