My friend Addison died this week.  Her family lives four doors down from us.  After a 23 month-long dance with cancer, Addison passed away in her home.  I’m told it was peaceful and she was surrounded by family.   Next month she would have turned 9 years old.

The description of the moment she exhaled her last breath reminded me in many ways of my own mom’s passing. I was there when she died.  I just read the memorial piece I had written on the 4th anniversary of her death. Perhaps I would change some words and rework sentence structures, but the memories of my last conversation with as I lay in bed with her, along with the intertwining threads of grief and relief, are as alive and heartfelt for me today as they were when they happened.

After my mother passed in 2007, a neighbor had taken up a collection and delivered a Bittersweet Magnolia tree for me as a living memorial to mom’s life.  I planted it just outside the back door of my home office where I could see it every day.  Each year in April, the month that mom died, more and more flowers bloom with a very special, and very personal, beauty.  The woman who bought this tree was Kim Holl; Addison’s mommy.

I cannot even write this without crumbling here at my desk; the intertwining threads of our lives can be incalculably complex yet are plainly simple when heartfelt.

I am a cancer survivor and have been in remission since 1995.  The fact that I “beat cancer” feels like, quite frankly, both a blessing and a curse.  The joy and gratitude I have for being a witness to my own Chris and Caity’s lives is immeasurable.  The ache of powerlessness when those around me are afflicted can be deep and tortuous.  Since 1995, this has happened more than I care to think about, more than I can count.    I don’t know if “survivor’s guilt” is an appropriate term, but I know I am often voraciously inclined to reach out and extend a hand.

I have to keep reminding myself that I am responsible for the effort, not the result.

There is something about cursing God and begging God in the same breath that attracts and captivates me.  It also can get me in trouble.  Perhaps reaching out is my way of staying in touch with the memory my mother’s and grandmother’s lives cut short by cancer.

Being a survivor doesn’t necessarily mean I know what to do, or what to say.  But it has taught me that sometimes it is the smallest gestures that make everlasting impressions.

My last conversation with Addison is etched on my heart.  Poking my head in the Holl’s mudroom door to look for Bessie’s leash (our day for dog-walking duty), the life in the kitchen pulled me in.  Aaron stood over a skillet at the oven grinning, tending to his eggs and hash browns.    I saw Addison’s little sister Ava playing like a prairie dog, bobbing her head up and down behind the family room sofa.  I then spotted the back of  Addison’s head as she sat in “her place” on the sofa.  Walking into the family room where she could see me, I waved and blew her a kiss.  She waved back at me and smiled.  This would be my last hello.

I want to think I did enough. Actually I just want think I did what I was supposed to. Aside from texts, voice mails, and Facebook posts, my role was to support Leigh, who was directly supporting the Holls.  Playing second fiddle has never come easy for me, but I’ve been around long enough to know when Leigh is involved, it’s usually an honor to have her back.

There were a couple of instances I did get to participate directly.  Unsure Addison would be able to enjoy the winter holidays, I was part of the group that, after bedtime on July 24th, decorated Holl’s home for “Christmas in July”. In shorts and bare feet, it felt Christmas when growing up in Hawaii.  The Christmas dinner we shared the next day was wonderful. 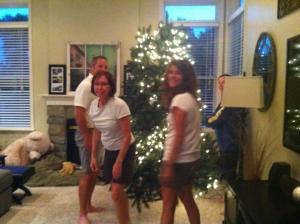 As the weight of fall became heavier and heavier, I bought Kim a t-shirt embroidered with her new favorite slogan.

It’s not a Bittersweet Magnolia, but it is me.

And then there was the real Christmas surprise.  Dressed as Santa, I paid a surprise visit to Addison, Ava and their two cousins.  If you want to hear the sound of pure joy, turn your volume up and listen:

With Addison in her special spot on the sofa, I sat down next to her.  Her watchful eyes carefully studied me as I passed out the toys (yes, she loved the Webkinz!) and as the other three quizzed me to see if I was the ‘Real Santa’.   I regaled them with crazy stories of a lazy Rudolph who got fat in the off-season, and asked them whether their mommies had been naughty or nice.  All the while Addison kept her constant gaze on me.

When the time had come for me to say goodbye, I leaned over toward Addison and said, “Can Santa give you a hug?”

With lightning speed she shot out her arms and put them on my shoulders.  Leaning in, choking back tears as best I could, I whispered, ”Addison, you are a very, very special girl.  Santa loves you very much.”

Addison squeezed my shoulders. In this moment I felt like the ‘Real Santa’.

I said goodbye to the other three and ho-ho’d and jingled my way out of the front door.  Kim followed.  When I turned to face her from the front stoop, through her tired, weary eyes she smiled and said, ‘Thank you’.

But it was me who really needed to be thanking her.  I could only hope I, for just one moment, could be for her what the Bittersweet Magnolia is for me.

We have known Kim and Aaron since before Addison was born.  Addison was a student in Leigh’s Pre-school class at ages 3 and 4. Addison and family travelled to Rhode Island last September for Caity’s wedding.  There was more than one very special Father-Daughter dance that night.

If you’re at all inclined to pray, this is a man and his family that can use one from you in the days ahead.

As for the Bittersweet Magnolia in my backyard, I know mom will be thrilled to share her tree.  “Mom, I want you to meet my friend Addison.”

Nearly a year later, a purple ribbon used to tie the balloons together at Addison’s memorial service remains tied to a branch on Mom’s tree.

Love to Addison.  Love to Aaron, Kim and Ava.

About Mom: Another Masters

22 thoughts on “My Last Hello”