I Am The Father

Father’s Day, 2013;  My first as a grandfather, and my first nap with my first grandchild.  I will treasure the memory of Levi laying on my chest for an hour nap until I breathe my last breath.  Softness, warmth, love.

With Leigh visiting Caity and Pete for an extended weekend in Connecticut, my solo time has given me the rich opportunity to reflect on Father’s Day and all of the Fathers in my life.     I am blessed to have both my dad and my father-in-law alive, and well, as the Patriarchs of their respective families.

My father, Michael Alexander McBride, is a living manifestation of faith, family and service.  I can’t say I was the greatest student on all the lessons he tried to teach, but I will say the greatest lessons I did learn were from watching the way he lived his life.   His nearly 30 years of naval service included commanding a nuclear powered submarine during the Cold War era.  I wouldn’t learn about his contributions to our country’s national security until much later after following in his footsteps to Annapolis.    Consistent with the moniker for the US submarine force, “The Silent Service”, he never really talked about what he “did”. He just did it.  I am certain he is, at some level,  still uncomfortable with me sharing this. 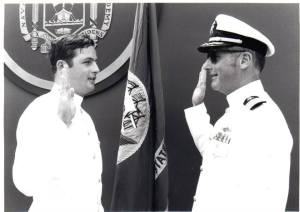 Later in life, watching him care for my mother during her 3 year dance with cancer, he showed me what love really looks like.  Seven years have passed since Mom died.  While Dad is happily remarried and living a very full, active life with Jan,  his continued love for Mom is readily apparent with each and every tender recollection of their 51 year marriage.   I could not have had a better example to teach me about unconditional and unwavering love. 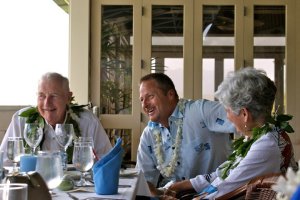 My father-in-law, S. Joseph “Joe” Moomaw, is also a stalwart example of faith, family and service.    At age 32, he married Carol, a widow with 4 children.  Leigh, then age 5, immediately became his Princess. This also began a lifelong series of reminders of Joe’s passion for the Red Sox,  that Flag Day is on his birthday, and of course his  legendary skilfulness of placing his “size 9 ½ shoe” up into a wide variety of locations.  Quite frankly, it is entirely possible I would not have passed the “Joe Test” had I met him any earlier in my life than I did.

Joe would go on to “sire” (his words!) two more sons and he remains the Patriarch and spiritual center of this family that includes 6 children, 15 grandchildren, and 5 great-grandchildren.  The family owned, small business he helped start and grow now employs a fourth generation of Moomaws. While the true identity of his first name is as guarded as closely as some of our nation’s secrets, I long ago bought into the Moomaw family standard, “S stands for Saint!” 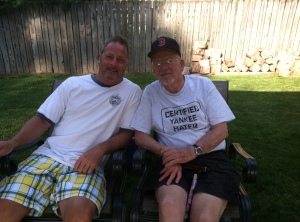 More recently, a  ‘father figure’ emerged in an unexpected setting from an unexpected source:  It came while observing my son Chris just minutes before Levi was born.  Having been assured there was no sign of Lindsey moving into the final stage of  labor, Chris headed to Hospital Security to pick up the required identification pass.  Leigh and I, the shamelessly giddy grandparents-to-be, gladly accompanied him on the walk .

Standing a few feet away and paying more attention to the different decor of this wing of the hospital, I was only vaguely aware of the words exchanged between Chris and the security guard.

Then I heard it.

With a calm, confident, humble tone that gently rose above us and  filled the room, I heard Chris say the words, “I am the father.”

In the timeless space these four words were spoken, every admirable quality shared by my dad and Joe, unveiled themselves in Chris.  Grace, confidence, responsibility, accountability, compassion, commitment, respect, and service.  Pure love.

“I am the father”.  Four simple words that reveal so much about the man I am so very honored to call my son.

In the flash of a second, a text arrived that Levi was making his way into the world. Chris flew like the wind, as I knew he would.

With my hand still steadying me against the wall, my eyes welled up. I couldn’t wipe the smile off my face if I had tried. May 28, 2013, Levi’s birthday, was an early Father’s Day gift.  I am so very, very proud and happy for Chris, Lindsey and Levi.

It’s quite humbling to find myself at this awkward stage.  I’m standing in the shadows of two great Patriarchs,  that continue to love and lead by example, while my son is giving me the gift of watching his own fatherhood unfold.  These three amazing men are showing me how to be a father all over again.  It’s good to be me; it’s really good to be me.

Happy Father’s Day to Dad, Joe and Chris!  Each of you continues to inspire me.  Faith, family and service.  Thank you.

My heart leaps up when I behold

A Rainbow in the sky:

So was it when my life began;

So be it when I shall grow old,

Or let me die!

The Child is father of the man;

And I could wish my days to be

Bound each to each by natural piety.