My continuous streak of an annual Halloween ritual is about to end.   For the past 10 years I have dressed up in costume to greet trick-or-treaters calling at our front door.  Alas, this year I will be travelling and our house will be dark.   I don’t know how many people will actually realize the end of this era, but I am feeling a touch of sadness I won’t be in costume.

The first year in our new neighborhood I dressed as the Witch; a wicked looking witch.

Then, in 2004, I began to let my Halloween freak flag fly.  My coming-out costume was a Spandex Spiderman outfit.

Of course, it didn’t seem right to just stay at home, so I crashed the annual neighborhood Halloween Party held in the cul de sac at the top of our development.   Approaching the gathering of young trick-or-treaters from the yard between two homes, I initially climbed up on a wooden jungle-gym, crouching as I silently stared at the throng of bewildered young trick-or-treaters and their mildly confused and concerned parents; they were staring back at me.  A nervous hush had come over the gathered crowd: Nobody knew what adult in his right mind would be sporting the red-and-blue tights at the children’s 5:00 PM Halloween party.  Quite frankly, I think several of the parents’ Spidey-senses were tingling at that moment.

After a few moments in my make-believe web, I jumped (well, “jumped” may be a stretch, but you get the point) to the ground and worked my way towards the costumed kids.   It didn’t take long for the little buggers to lose any semblance of fear and they began chasing me with swords, pitchforks and baseball bats. At 43 years of age with two bad knees and perhaps, just a few extra pounds, I was in no position to run to, or from, anything.  I thought my chest would explode and became concerned with what the parents would think this spandex-clad stranger began breathing very, very heavily.  There may have been a few tenuous moments.

Ultimately my breathing slowed to normal and everybody seemed to get somewhat comfortable with Spiderman.

Over the years I’ve switched it up a bit. Batman, Speed Racer, Fred Flintstone and the Holy Grail of Furry Fandom, the Pink Nightmare from “A Christmas Story”, have all made unannounced appearances on Trick or Treat night.  While all outfits have garnered curiously different levels of attraction and admiration, it is Spiderman suit  that has received, by far, most requests to be borrowed.  Honestly.

Not all costumes have been independent, solo appearances as Leigh is no stranger to my make-believe world.   Couple’s outfits have included Fred and Wilma Flintstone, Speed Racer and Trixie, as well as a nod to a treasured nursery rhyme, Peter and the Pumpkin.

Depending on the age of the trick-or-treater, reactions to the outfit are met with different levels of enthusiasm.  Fear is generally overcome by the view of a bucket full of treats. Although, I’m amazed how many kids will choose a pencil with an eraser over a Snickers bar.  (If not for being married to a teacher, I would never have even thought of a pencil as an acceptable Halloween alternative. But every year the pencil supply is depleted long before the candy and fruit choices are scarfed up!)

Of course, the year  we dressed as Fred and Wilma, there were a lot of Fred’s and a lot of Wilma’s.

I won’t be home in costume on trick-or-treat night this year, but I will be there in spirit.  Even though the house may be dark, there will likely be a pale of candy (and pencils with erasers) sitting on the doorstep to reward any trick-or-treater brave enough (or new enough to the neighborhood!) to approach.  Happy Halloween and Aloha! 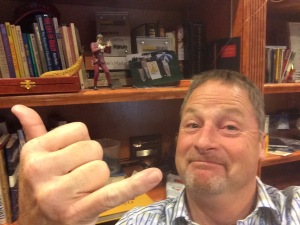 3 thoughts on “Trick or Treat?”