A One Word Suggestion

Tomorrow is Audition Day at the Harrisburg Improv Theatre (The HIT).  The ownership will be holding auditions to fill the positions on newly created House Teams that will perform the Harold format for the upcoming performance season.

The Harold, a long form improvisational comedy format, is simply a game of “make-believe” inspired by a one word suggestion solicited from the audience.  Troupe members contemporaneously collaborate to create a reality in front of the audience with characters, emotions, relationships, interactive scenes and maybe (just maybe!) an over-arching theme, that, more than likely, will have nothing to do with the one word suggestion.

In October 2015, after completion of the required three – eight week courses (Levels I-III) at The HIT, I auditioned, and was selected, for a House Team that would be named “Spank’d”.  The season-long commitment includes practicing, hiring a coach, and performing two weeks per month.  We’ve practiced in a number of places including the office of non-profit organization (after hours), at the HIT (when available – stage time is a precious commodity!) and my basement.

On the wall in the stairwell leading to the basement I have a paper copy of our Team Poster taped over a print.  As it has been there since November it has become a part of the scenery that brings a smile to my face every time I pass by.  But for Levi, my increasingly aware and inquisitive 3 years old grandson, it grabbed his eye on his latest visit.  As I walked down the stairs with him to play he took notice, and pointed.

“These are Daideo’s play buddies.” I said, picking him up in my arms.

“Daideo’s play buddies!” he repeats, studying the faces on the poster.

“Daideo’s play buddies!” he declares, as he would each time he would pass the picture going up and down the stairs for the rest of his visit.

Last year I’d written a couple pieces on the emotional trials and tribulations I encountered while taking improv classes, I can now reflect on the past seven months as a member of Spank’d.

I expected I would have fun, learn some pop culture, and enjoy some benefit from this form of “play therapy”. What I didn’t expect was to come to admire and respect my troupe mates in the way that I have.  In fact I have come to love them, individually and collectively, in a very special way.  Yes they make me laugh.  Yes they make me feel young again.  Yes they have made me a better grandparent by honing my “make-believe” play skills.  But there is a deeper level of trust and respect and intimacy that has grown as we have met to practice or perform some 30 times over the past 7 months.  I don’t think I can adequately describe the gratitude I feel to have these people in my life.

Let me introduce you to my play buddies: SPANK’D is an initialism formed from the first letter of our first names: Sarah, Pat, Alex, Nate, Katt and Dave.

S. Sarah Scholl. From the time we met in our Level I Class Sarah has been amazingly supportive. She is the quintessential passionate performing artist. A central PA girl, theater and the performing arts have been in her blood since she was a child, and her passion took her to Temple University. By day she is a television producer, by night, she can be found anywhere in the Harrisburg arts community.   She brings her theatrical training, unyielding enthusiasm, and a lovely, engaging personality to everything she does.  Sarah and I have played scenes where we were sisters getting ready for a date, first ‘Tinder’ dates, and skaters on a “skating pond”. Sarah once commented on Facebook, “Pat, all of our great scenes end up with you on the floor!”  Ain’t that the truth!

Sarah the Dog Walker. “Pat all of our good scenes end up with you on the floor!”

P. I am the P in Spank’d. I couldn’t be more humbled, honored and grateful to be a part of this team. 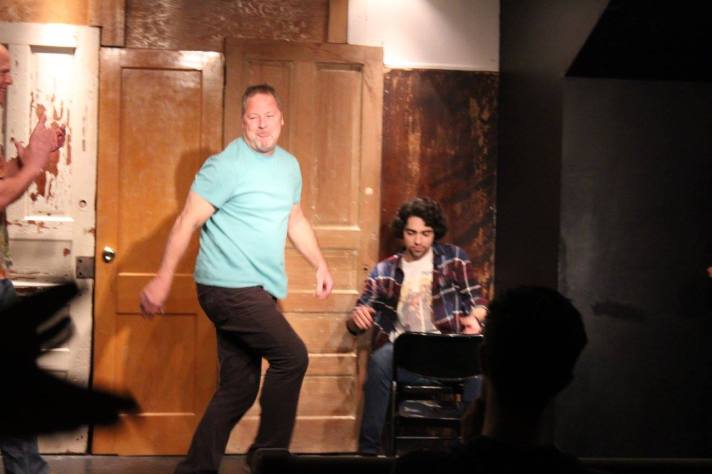 A. Alex Rabinowitz. Alex and I met in our Level I class with Sarah. On one hand, we are complete opposites. Alex comes from Long Island via Syracuse University and is a veritable compendium of all things pop culture; literally (check out his nationally recognized blog http://popculturebrain.com/ ).  Alex raved about the musical “Hamilton” before I even knew it was a thing; by contrast, in 1971, I did a 7th grade book-report on Alexander Hamilton, which was nothing to rave about. He is funny and classy as he is wickedly brilliant and quick on his feet.  Alex takes the prompt word “algorithm” and creates a scene of volunteers at an Al Gore rally, takes “landscape” with a mention of burrowing bees, and heightens it to God showing Jesus how he keeps mankind confused, and then takes a dinner blessing and turns it into thanksgiving meal with all his (her) sister-wives.   My respect and admiration for Alex was forever locked-in when, playing a manipulative brother, I placed my chin on his shoulder and began singing a made-up a song.  Not only did he endure my tone deaf and rhythm-less “singing” with a straight face, Alex and I mind-melded and finished the words of the made-up song in unison. 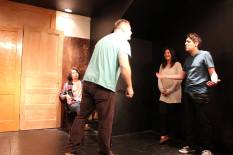 N. Nate Smith. Nate and I met during our Level II class shortly after his graduation from Pitt. This guy has got a future. Imagine the talent of an early Chris Rock and Dana Carvey, combined with a wisp of Quentin Tarantino. Whether he is acting, directing, filming or dubbing during post-production, he is a ball of creative energy that knows no boundaries. Nate and I were asked to do a two-person scene during the team auditions last October based on “Hogwarts”.  I had no idea this was a Harry Potter reference.  Nate not only carried me in that scene, he likely carried me onto a team.  Nate has been a one-armed steel worker, a disappearing (mid-sermon) preacher, and a chair-bound mother who needed her toes attended to while we watched Netflix.    You can always count on Nate to not just save a scene, but heighten it and explode it with energetic finesse.  This dude has talent and is fun as hell to play with.

K. Katt Shea. The first time I met Katt in our Level II class I felt like I had known her in another life. She brings her California-cool roots with a deeply passionate, social consciousness, blended with creative and energetic fearlessness. In any given scene she readily taps into her life experiences as an inner-city school teacher, Uber user, part-time dance club waitress, Guatemalan hiker, river kayaker, African safari queen, recovering vegan and statewide teens-at-risk program developer.  And that’s on a slow night.  She’s smart, fun, funny, cool, thoughtful and passionate; a delightful blend of grace and grit. We’ve played scenes as ex-spouses in a custody dispute (she was the responsible one – go figure!), dance club partners, and two stoners on a bench.  Incredibly bright and incredibly fun, Katt is always a hoot to create with. 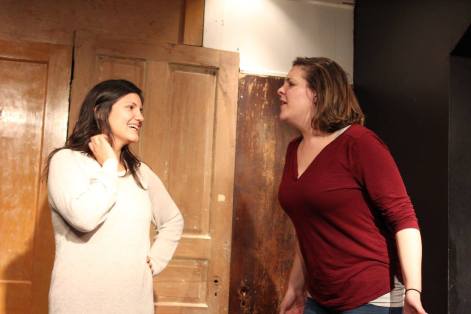 D. Dave Delong. Dave may have the biggest heart of any man I have ever known. He is Big Love. Every time I see him he has a warm smile, a big hug, and, more times than not, food he wants to share.   That’s who he is.  Although Dave had been around and taught teen-aged classes at the HIT, he joined the rest of us in our Level III course. He has the artistic sensibilities of a musician (trumpeter), the practical skills of a fire-starter and home-builder (not at the same time), and the easiness of a warm summer day.   As a High School math teacher in the Harrisburg School District, he lives and breathes inner city education challenges that most of us just read about.  Like every one of my troupe mates, Dave is supportive and loving as an acting partner, but then again he’s not acting. He just is. 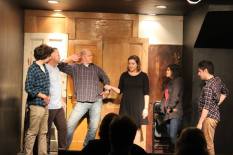 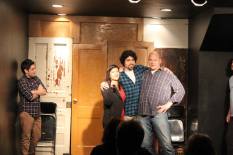 I would be remiss if I didn’t mention our team coach, Toby Bradbury.  Toby is a widely acclaimed and experienced improviser that has pushed our team in ways that I didn’t realize existed.  Challenging, talented, bold; a great teacher. I am very grateful I got to learn so much from you. I also want to call out Jake and Somers Compton, owners of the HIT.  I can’t thank you enough for following your hearts and vision for the theater, and giving me the opportunity to play.

I consider myself blessed to be in a position in life where I have choices in how I spend my free time.  Quite frankly, my improv time ranks up with my grandkid time.  I am blessed to have found these play buddies to play with; and I’m a better man for it.

While tomorrow’s auditions will give birth to new house teams for the HIT with a new slew of wickedly brilliant Level III graduates and veterans alike, I will not be there.  In our last practice Spank’d unanimously agreed to remain together as a troupe for the upcoming performing season.  While I have immense respect and awe for the entire HIT community and increasingly talented group of improvisers ready to perform, I cannot express how thrilled I am that “Daideo’s play buddies” want to keep playing together for another season.

That’s right! There’s still time for you to get Spank’d!

Can I get a one word suggestion? 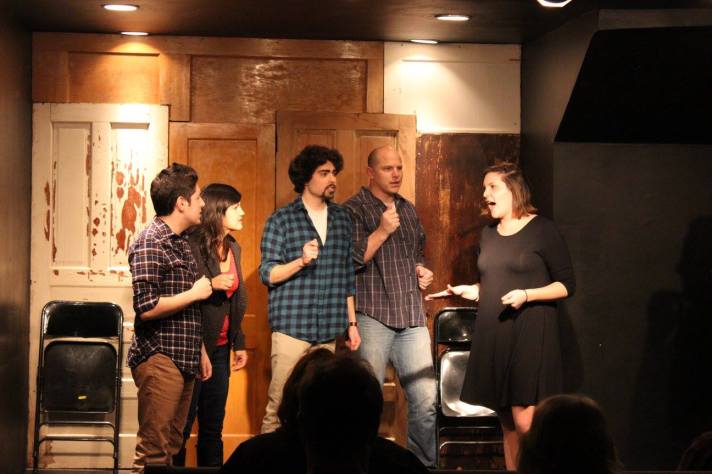 If you’re local and want to check out shows or classes, or looking for another great reason to visit Central Pennsylvania, check out the www.hbgimprov.com .  You won’t regret it.

2 thoughts on “A One Word Suggestion”